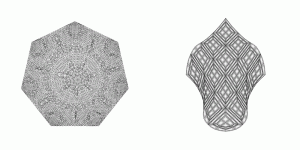 Loom explores aspects of recursive geometric subdivision. Simple shapes are subdivided into further smaller shapes (typically triangles or quadrangles). Applied many times over, complex patterns and textures emerge.  Rather than positioning the computer as a generative creative agent, computational processes serve as mechanical means for weaving virtual cloth from simple algorithmic patterns. This is not to belittle the scope of computation, but to seek effective means to engage with its genuine power, which is for me linked to the mystery of its dumb operation – its strange invisible labour. The computer is bound by regimes of instructional necessity, however the scale and speed of its processes suggest an uncanny sense of autonomy. The paradox of computational labour is closely related to the aesthetic potential of geometric subdivision. The abstract conceptual schema – the subdivision algorithm – is never sufficient on its own. It has to be played out on a surface. It has to pass from consciousness to the unconsciousness of iterative procedure. It is precisely in the tension between mathematical clarity and repetitive, unreflective drawn performance that the terrain of geometric finitude begins to shimmer.