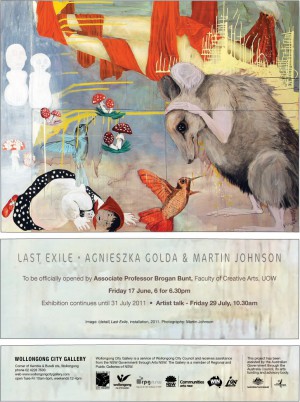 Thanks to Martin and Agnieszka for asking me to open this show, which I know has taken so much work. We shared an exhibition venue last year. I can remember being very impressed by their ingenuity, which involved manufacturing all manner of large and small pieces in their relatively modest home studio, then somehow packing them up, carting them to the gallery and re-constructing things without any sense of either disabling chaos or fascistic organisation. The move simply represented an opportunity, starting with the old and familiar, to build things anew. All the stuff was neatly bundled like kindling or better like the walls, beams and tiles of an old house that is moved from one place to another.

And this is also, it seems to me, what this exhibition is about – the problem of moving (and the problem of staying still). How to move without leaving everything behind, but the necessity also, in leaving, to permit all manner of unexpected meetings, strange encounters and transitions. The most obvious move is from the folk culture of Poland through the apparent detour of Japanese anime to whatever it is that Australia represents (a place of exile? A place that demands a fanciful work of reconstruction? A stripped down, plainly scaffolded space – the terrain of contemporary installation art?).

The thing about this exhibition – I might as well say it now – is that everything that is happening at the practical level of making – of painting images, of weaving little shawls for votive wooded figures, of tacking bits of pine together – is mirrored at the formal-aesthetic and thematic level. Everything involves a process of negotiation, whether it is moulding the work to the demands of the specific gallery space, or setting sculpture and textiles alongside painting, or the cute alongside the frightening, or the minimal alongside the kitsch, or the human alongside the animal, or elements of Japanese Noh theatre and anime alongside the Slavic myths of Baba Yaga. The exhibition establishes a liminal space in which these and many other elements discover a hesitant and uncertain terrain of encounter.

You can’t miss Baba Yaga. She is in many of the paintings, sculptures and prints. She flies through the air in a mortar bowl. She is a kind of demonic pestle mixing together all that she encounters. She lives in a house that is supported by chicken’s feet. The house is mobile. It constantly turns to face the darkest part of the forest. To enter, the supplicant must speak to the house, must ask it to move, must utter, according to one story, the magical phrase, “Turn your back to the forest, your front to me.” 1

In terms of these encounters, what I find especially interesting is the mixture of meeting (conjunction) and incommensurability. Things are brought together, but without losing their sense of difference. Rather than any effort to forge a unifying cross-cultural or aesthetic-stylistic myth (and an overall scene of resolution and reconciliation), there is a sense of playful and intrinsic tension, a sense that all meetings are contingent and that multiplicity is less something to be mourned than celebrated. Like Baba Yaga, who according to Laura Strong is known variously as “the Guardian of the Underworld, the Mistress of the Forest, the Goddess of Death and Regeneration, the Wolf-Goddess, the Bone Mother, the Mistress of the Animals, and the Guardian of the Water of Life and Death” 2, Last Exile – for all its apparent finality – has an ambivalent aspect. It is as much about projecting a space of possibility as it is about representing a space of loss, mourning and death. Here there is a strong sense of what Russian literary critic, Mikhail Bakhtin, terms the carnivalesque – of the world turned upside down and of the productive force of the grotesque. 3

This sense of reversal is evident for instance in the emphasis on anthropomorphic animism. The life and agency of animal spirits and of inanimate materials is juxtaposed to the static, awkward corpse-like weight of the human forms. At the same time, the passivity of the human enables motions of transition and transformation. See how the cloth wrapped around human flesh, light and flowing, suspended in the beaks of birds, grows hard and angular, like the contours of bones, and then shifts into the solidity of pale wood and the flatness of printed textiles.

Alongside these chains of metaphoric association there are also points of irreconcilable juxtaposition when, for instance, detailed textured forms – foxes, birds and the like – are placed beside baldly outlined figures and the flatness of patterned or plainly dripped surfaces. Here a kind of irony seems evident – in which every figurative gesture, however extravagant, however baroquely pursued, is also at the same time reflectively suspended – but in a way that manages to never entirely withdraw from a faith in the power of totemic animals, mythical figures and shamanistic signs.

In this respect another dimension of ambivalence is evident. What I find most odd, interesting and affecting is that it is as though the impossibility of the image (and the unlikeliness of summoning the liminal, other-worldly experiential space) is acknowledged at the same time that a faith in its arcane powers of imagery and reconstruction is made manifest. Belief and the suspension of belief run somehow side by side. And this again indicates a creative commitment towards bringing things into dynamic relation. Myths of continuity – of the life prior to exile – are nothing until they are brought to life in their artifice – or through artifice brought to life. For example, the thin lengths of Bunning’s pine establish a fragile ritual space, while at the same time undermining any nostalgic hope that it can literally and coherently return.

Now I can’t help myself. A technical word comes to mind. The crucial word for me, alongside “encounter” and “incommensurable”, is “iconostasis”. In eastern Christian churches the iconostasis is the wall of paintings that separate the nave from the sanctuary. It also refers to the practice of propping up church icons on portable stands. The iconostasis sets an excess and extravagance of the image alongside a self-evident work of constructedness. It demonstrates a weird mixture of pragmatism and faith, reflective distance and imaginative investment that is characteristic also of Last Exile.

I’ll conclude by congratulating Agnieszka and Martin on their long running artistic collaboration. Yet another field of negotiation! Somehow, despite all the possible points of disagreement, blockage and collapse – as you individually make various things and arrange them in space, as you paint over one another’s figures – you manage this encounter, as the encounters within your work, with energy and hope.

This entry was posted in Uncategorized. Bookmark the permalink.