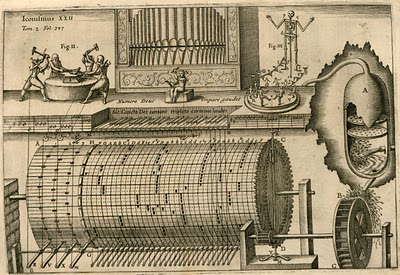 An image from Athanasius Kircher’s Musurgia Universalis (1650) depicts an automatic music machine, a kind of hydraulic organ. The notes are linked to a geared cylinder that is powered via a spinning water wheel. There are three miniature allegorical scenes on the top of the machine, each involving kinetic motion and one or more automatons. At the right a group of figures spin in a circle beneath a large skeleton. Composed as a kind of Dance of Death, the scene suggests a link between the circular motion of the cylinder and the overall fatal structure of human existence. In the middle a seated child holds a book and what appers to be a pen. The child would seem to write in the book (perhaps adding a note to a musical score) each time a key is automatically depressed. This suggests an uncanny affinity between human creative labour and the magnetic pull of the mathematically configured cosmos (which takes analogous shape in the precisely constructed machine). Finally, at the far left is a group of blacksmiths working at a forge. This is a reference to the story of how the Greek philosopher, Pythagorus, learned the rules of musical pitch by listening to the hammering of blacksmiths. This scene establishes a relation between the origins of mathematically-guided musical understanding and the advanced musical knowledge that underpins the construction of the current instrument. Additionally, the scene functions as an analogue for the invisible, mechanical labour of the machine. The various scenes work together to provide metaphors for a curious space of operation. They provide playful, allegorical vehicles for grasping the function and conceptual universe of the device. They manifest that alongside the causal relation between water, gears, cogs and musical notes there is a related need to convey the philosophical and affective imaginary that informs its construction.

The images in my Loom exhibition attempt something similar. Finely resolved geometric subdivision works to provide a non-technical means of conveying the alien space and time of computation. My images provide a means of figuring the contours of an elusive field of logical process and electronic labour.